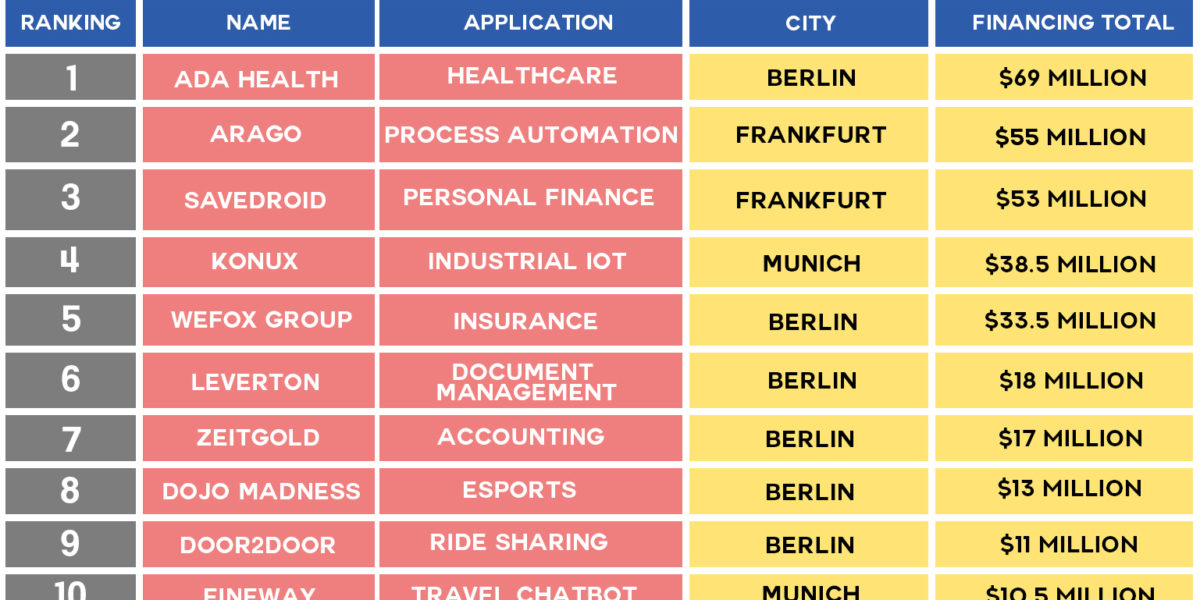 Ask any American to tell you three things about Germany and the first thing out of their mouth will be Oktoberfest, likely because they’ve “always wanted to go there”. Germany isn’t just about attractive buxom blondes serving beer though. That’s such a dated, narrow-minded stereotype. Germany doesn’t just have attractive blonds, they also have attractive brunettes. Yes, zee Germans are quite proud of their country’s natural beauty, but it’s not only skin deep. Germans have a strong work ethic, which is why they have the biggest economy in the EU (by nominal GDP), and which also helps explain why many of them lack a sense of humor. That’s why when Mutti Merkel announced plans to build an artificial intelligence center with the French, we wanted to know more about the state of AI in Germany.

With the US, China, and Russia at the forefront of AI development, the EU has a lot of catching up to do. Both France and the UK have announced billion-dollar AI investments to boost their capabilities. Germany, the stable juggernaut of the EU, seems conspicuously absent from the front lines. According to Georgia Tech professor and AI specialist Sebastian Pokuttathis, this can be put down to systemic issues, but that doesn’t mean nothing’s happening. Let’s take a look at the top AI players in this historically conservative economy. 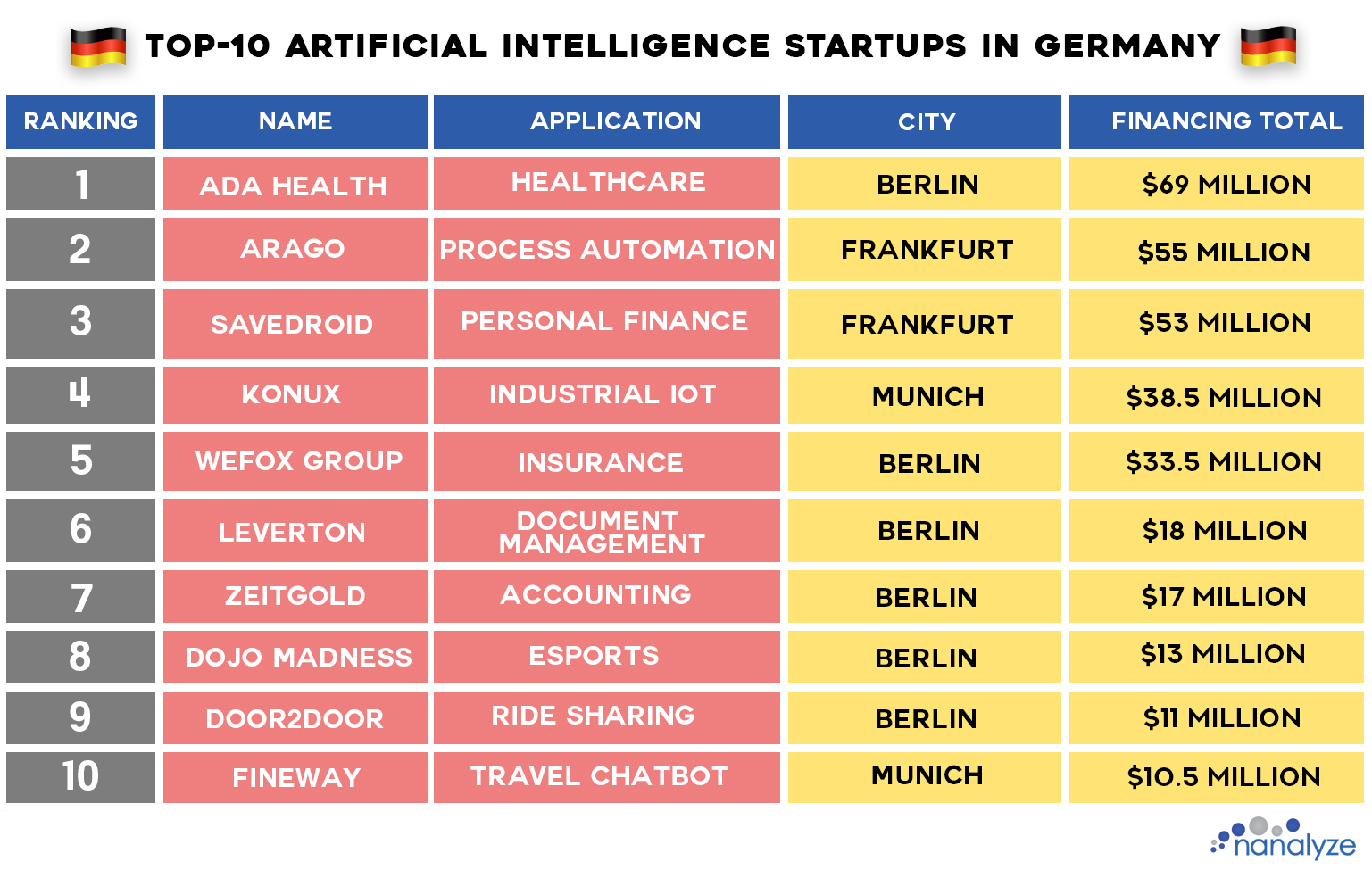 Most people may not know that Berlin is 9X the size of Paris, and it’s where 6 of our 10 startups hail from. Founded in 2016, Berlin-based Ada Health has raised $69 million to develop a virtual assistant, not unlike a Siri for health. Joining a slew of mobile health startups out there, Ada is an AI-powered “personal health companion” that looks at your symptoms through a conversational interface on your mobile and offers probable causes. Have you ever browsed WebMD because of a particularly resilient cough and found you might be terminally ill? This is what Ada helps you avoid.

Developed by more than 100 doctors and scientists, the app lists probable causes for the user based on their profile and the data they share. If needed, it also puts you in contact with a doctor remotely. Ada is integrated with Apple Health and the team is now developing further sensor integration to enhance the AI’s predictive capabilities. The app became the “best patient platform” at the 2018 Healthcare Business International Innovation Awards and is available through the App Store or Google Play.

Founded in 1995, Frankfurt startup Arago has raised $55 million to develop a general AI platform for business process and IT automation. Joining the seven startups we already covered for you in the field, the AI algorithm dubbed HIRO targets business and IT processes in areas like finance, insurance, HR,  IT infrastructure, or application support. HIRO breaks down processes into knowledge items (KIs), the smallest possible building blocks of information representing a process step, then assembles these KIs into a solution for a given issue or query, learning more with each iteration of the process – perpetually:

Arago claims their AI can achieve an 80% automation rate with 80 days of manpower in 80 days or less. HIRO has demonstrated its strategic and learning capabilities beating human players and the built-in AI in the civilization-building strategy game called Freeciv which is deemed more complex than chess or Go. UBS AG, the international investment bank and wealth management company, is one of HIRO’s top clients since 2016.

Founded in 2015, Frankfurt startup savedroid has raised $53 million to create a personal finance app using AI and gamification to optimize saving and spending. The app is an AI bot that optimizes consumption, suggests “if, then” types of savings triggered by certain events (ie. going down to the gym), and automatically transfers these amounts to a savings account run by partner bank Wirecard. The app is only available in Germany and has been downloaded 200,000 times, saving users more than $12 million. 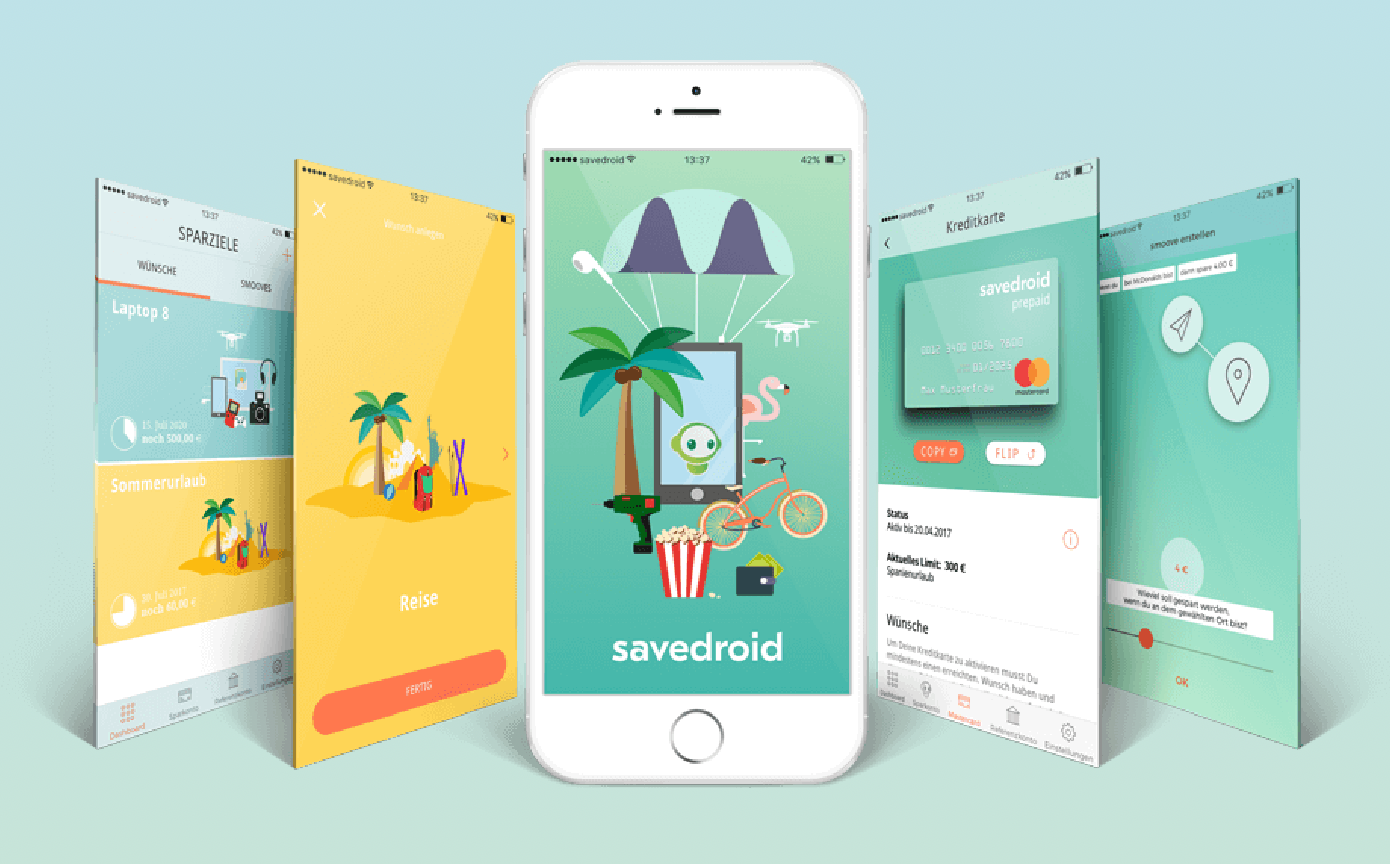 Savedroid has been in the news lately following a successful ICO of $50 million where they issued their own coin that can be used for savedroid fees or to trade other cryptocurrencies. The ICO closed with probably the worst PR stunt ever, where the company pretended to pull an exit scam. Maybe it seemed to be a good idea at the time. As of yet we are unsure about the price discovery process of savedroid coins, but the company declared that a certain percentage in their ownership will be “burned” to manually inflate prices over time. Our position on ICOs remains unchanged.

Founded in 2014, Munich startup KONUX has raised $38.5 million to create an end-to-end Internet of Things (IoT) sensor platform for industrial clients. Their first step is identifying key data needed for the optimized maintenance of machines and infrastructure. Smart sensors are applied to machines which send measurements to a centralized cloud. The data is then analyzed by machine learning algorithms, giving predictive analytics to the operators.

The company is currently specialized in railway networks and switches and works closely with Deutsche Bahn, the state railway company of Germany. According to KONUX, their platform reduces costs by 25% by minimizing downtime and maximizing performance through real-time monitoring of assets.

Founded in 2014, Berlin startup wefox Group has raised $33.5 million to create an independent insurance comparison platform that currently lists more than 200 providers. There’s no AI involvement in the core process of wefox here, but the company is interesting to us because in June 2017 they acquired One Insurance, a fully automated digital insurance provider. One’s processes use AI to radically reduce the time it takes to buy coverage or go through a claims process. It takes three minutes to purchase insurance and one minute to get a claim reimbursement in 60% of the cases when submitted by mobile.

One also allows customers to check claims status in real time. Wefox claims their insurance comparison business remains unbiased as all products (including One’s offering) are based on scoring algorithms. They see synergies in the improved customer experience and data transparency created by the integration of the two platforms.

Founded in 2012, Berlin startup LEVERTON has raised $18 million to develop an AI powered data extraction tool for corporate documents. Their optical character recognition (OCR) algorithms extract and structure data from real estate documents, financial documents, employment contracts, and non-disclosure agreements. The information is saved in a data repository where users can browse for whatever they need, or transfer the data into integrated business applications like SAP. 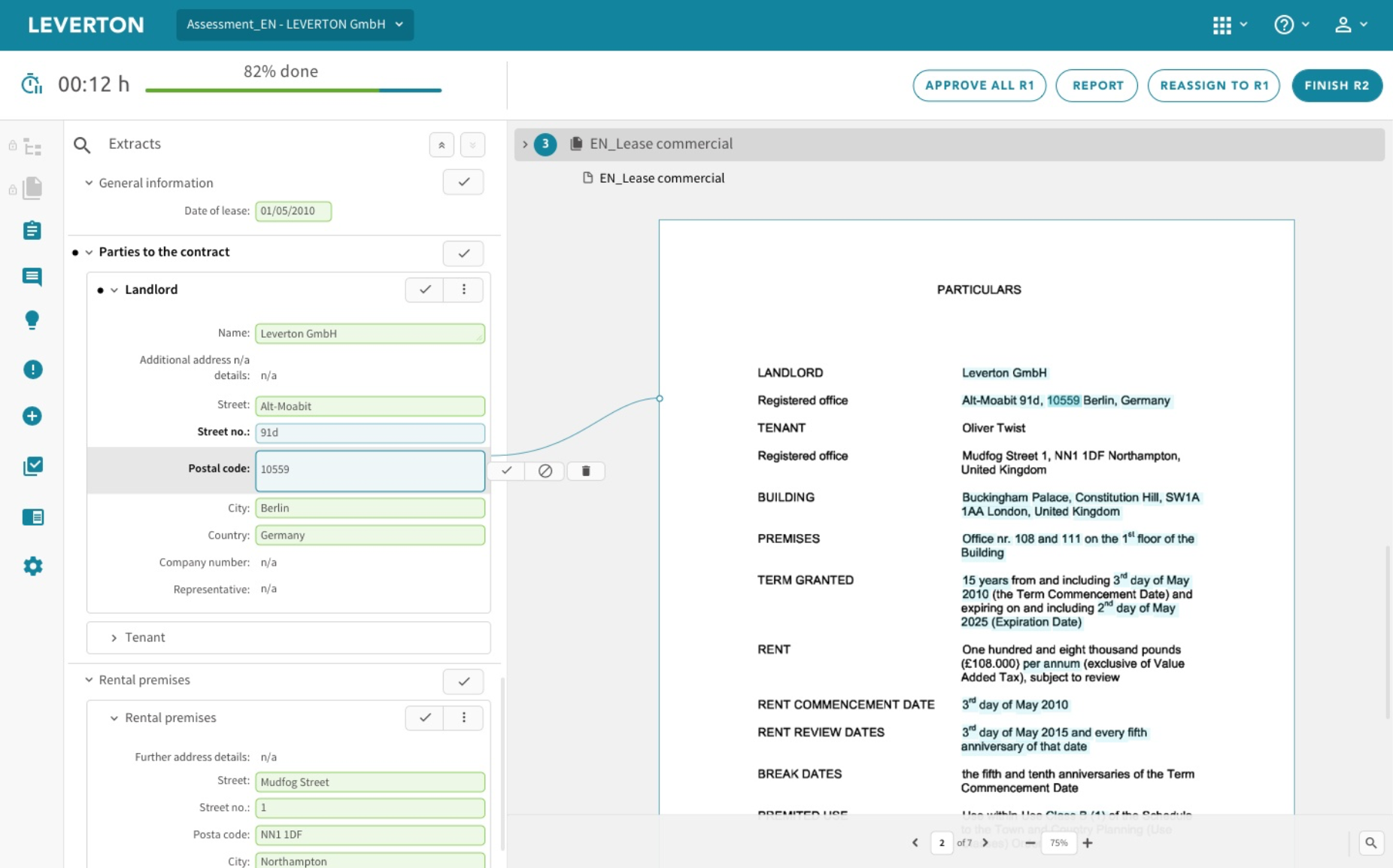 LEVERTON has over 100 clients including major global names such as Deutsche Bank, JLL, and Strabag. This kind of work tops our list of jobs that will be lost to automation, something we looked at in our article on “What Jobs will Robots and AI Do in The Future?”. Interns better start looking for something else to do.

Founded in 2015, Berlin startup Zeitgold has raised $17 million to develop a complete solution for the financial administration of small businesses including accounting, invoice management, and payroll. Created by the co-founders of SumUp, the mobile payment company, Zeitgold manages and structures all your business paperwork (physical or electronic) using OCR similarly to LEVERTON above. A company representative picks up all paper-based documents once a week, and these are then scanned and filed electronically for you. 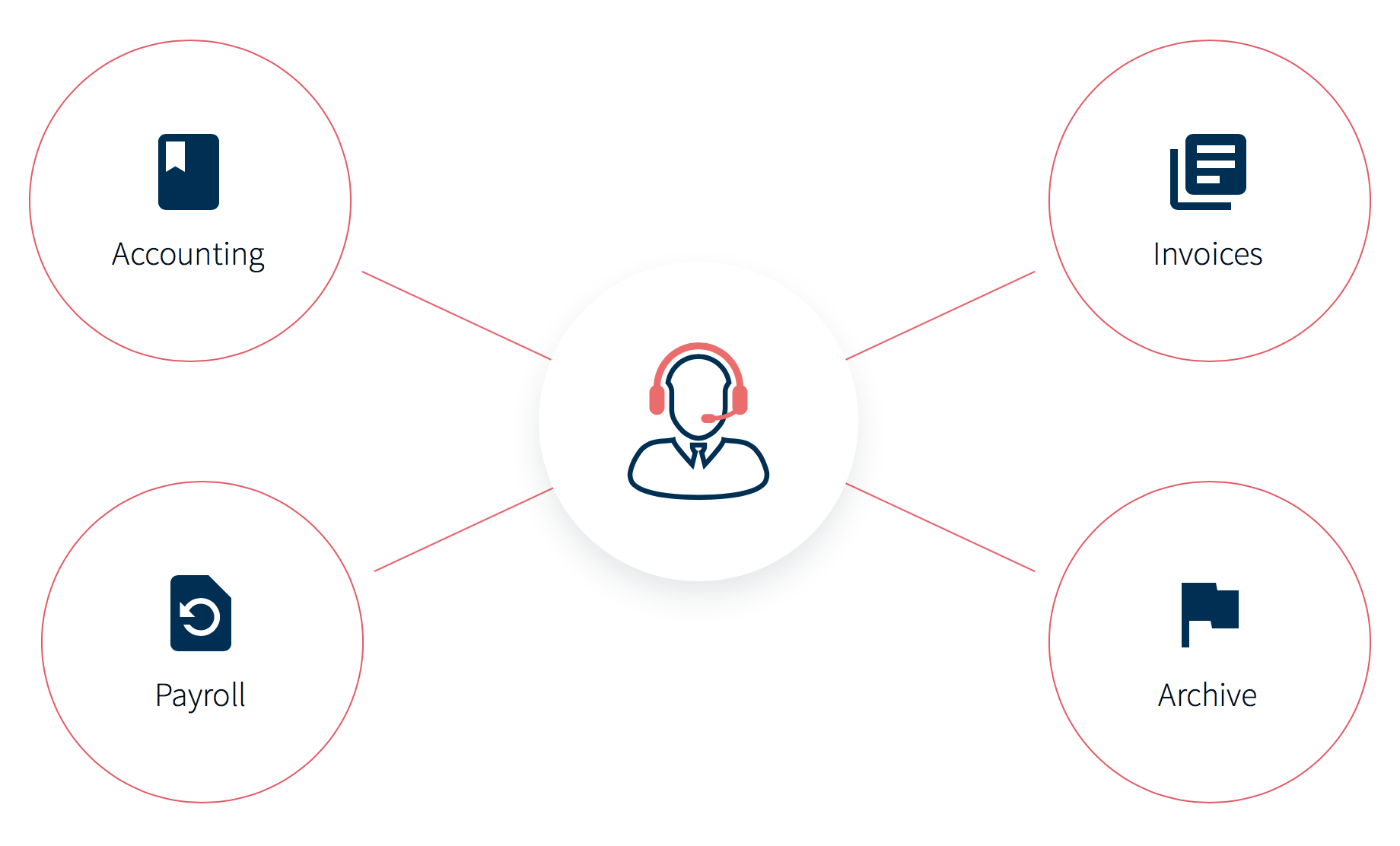 As a business owner, you can authorize invoices via their mobile app and all necessary information is channeled to your designated tax advisor, another item you don’t need to deal with. Zeitgold claims their service costs less than similar options on the market. Their service currently works in Germany with international expansion planned to neighboring countries.

Founded in 2014, Berlin-based DOJO Madness has raised $13 million to create a big data platform that helps players and fans understand and master their favorite esports games. Esports is big business, something we talked about before in our article on 8 eSports Startups Streaming and Dealing the Action. DOJO madness offers a suite of apps that provide data-driven analytics for amateur and professional players of popular titles like League of Legends, Defense of the Ancients 2, Overwatch, and Counterstrike: Global Offensive.

According to DOJO Madness’ CEO, many professional players are still recording in-game stats using pen and paper. DOJO apps provide real-time coaching during games and create informative game analytics like 2D tactical replay and heatmaps that help with post-mortem analysis. Mobile apps for amateurs are available for free with some in-app purchases, whereas the Shadow analytics platform for professionals commands a hefty price – between $860 and $1175 per month – depending on the games you want to apply it to.

Founded in 2012, Berlin startup door2door has raised $11 million to develop a “demand-responsive transport solution” platform – a ridesharing service framework in plain talk. The team’s vision is to make cars in cities redundant by creating an on-demand ridesharing service that supplements classic public transport routes. Their platform simulates demand and responds to it in real time, manages dispatches, booking, route planning and drivers.

Their AI algorithm, which calculates and optimizes pooling configurations and routes, is being tested in Berlin in cooperation with the German Automobile Club under the name allygator shuttle. Door2door’s solution can be connected to existing public transport providers’ to optimize transport holistically or it may be used as a standalone service.

Founded in 2015, Munich startup Fineway has raised $10.5 million to develop an AI-based travel planning service that uses deep learning to propose tailored trips instead of the usual “search and compare” method. Currently, clients can search the Fineway website for predefined packages until the next stage of their development, the Travelbot is live. The Travelbot is going to be a virtual travel agent that recommends custom packages based on an unscripted unique conversation with the client. 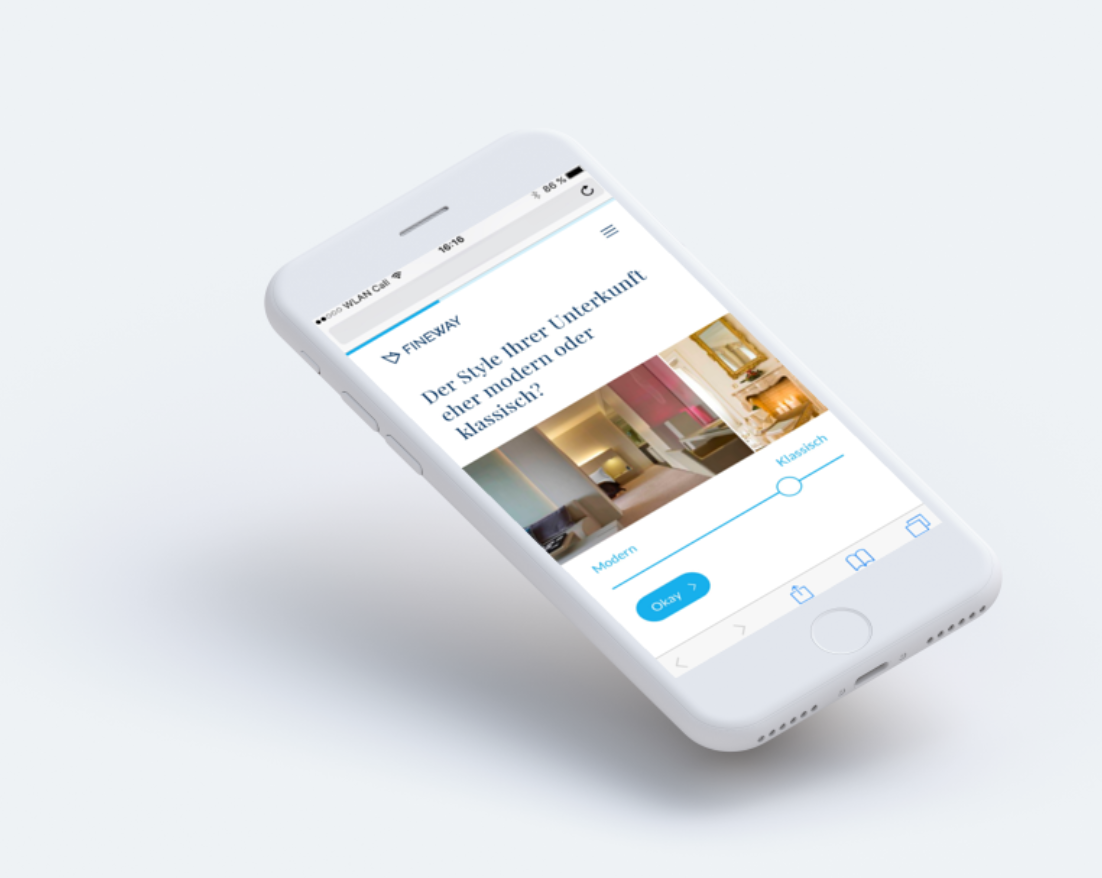 As a third stage of development, the company will introduce connectivity to home devices later this year. Fineway currently offers packages for German travelers to 21 exotic countries and their website only speaks German.

From the looks of the above market map, this probably won’t be the last article we write about artificial intelligence startups in Germany.

Worried about transaction costs when you’re buying stocks every month? Ally charges just $4.95 a trade which is one of the cheapest prices of any broker out there. Saving money makes sense.

The Solarisbank opens for blockchain companies

5 Open Source Libraries to Aid in Your Machine Learning Endeavours