Political and economic disruption is turning Edinburgh into a global fintech capital, making it the perfect time for ambitious startups to move their operations to Scotland.

The global financial industry is undergoing a transformation. From blockchain technology and smart contracts to mobile payments and robo advisors, innovation is rapidly redefining our relationship with money. At the same moment, Britain finds itself at an uncertain juncture following June’s referendum — a political event likely to define its economic prospects for years to come.

“From an outsider’s perspective, it appears as though Scotland is more spiritually aligned with Europe than other parts of the UK, and I have no doubt that fintech companies looking to enter the European market are thinking long and hard about alternatives to London right now,” says Gregg M. Schoenberg, head of advisory and investment firm Wescott Capital and author of The Financial Revolutionist blog. “Scotland and its financial services and technology sectors would be smart to remain agile during this period.”

Amid the chaos of Brexit exists a unique opportunity: for Scotland to become a global leader in fintech, an emerging field that’s set to shape the future of finance across the world. The proposition has captured the attention of experts in Scotland, the UK, Europe and beyond. But what does the opportunity look like exactly, and where does the journey towards fintech leadership begin?

“Think of it like baking a cake. In terms of ingredients, what does a fintech hub require?” asks Graeme Jones, CEO at Scottish Financial Enterprise, the representative body for financial services in Scotland. “Universities that provide high-quality postgrads, big financial institutions, a startup and enterprise scene, strong international connections. We’ve got the lot, and to make a success of it, we’ve just got to start connecting things up.”

Unlike a cake recipe, though, there’s no simple formula for orchestrating innovation. As a starting point, Scotland must focus on establishing an ecosystem that drives rapid development and unparalleled collaboration. From there, the country can build on solid foundations to define its niche within fintech.

“It’s too broad for Scotland to focus on ‘fintech’ in general because that term means different things to different people. The focus should be on two or three areas according to what Scotland, and particularly Edinburgh, is good at. It would be a mistake to try and be all things to all people,” says Jonathan Segal, partner at Fox Williams, a law firm with a dedicated fintech and alternative finance practice.

Notably, Scotland already has strong connections with globally-operating companies. Major financial industry players such as Morgan Stanley, Royal Bank of Scotland and JPMorgan are based in Edinburgh, and the Scottish capital’s long-established expertise in asset management has the potential to drive the country’s move towards finance innovation. Glasgow, which is less than an hour from Edinburgh by train, has an international financial services district that is home to world-class mathematics and engineering talent. Identifying and utilising the different strengths of each city could lay the groundwork for success in a wider fintech ecosystem for Scotland.

“Cities are extremely important, given the concentrations of people and talent that flourish in them. Infrastructure also tends to build up around those concentrations. For example, Edinburgh has at least 15 different workspaces housing various types of business,” says Danny Meaney, founder of startup accelerator UP. “Giving everybody a fiver doesn’t build success. The focus must first be on the concentration of talent. Technology then allows you to tie in other places to access that talent.”

To create a fertile fintech community alongside the existing financial establishments of each city, technology infrastructure such as super-fast Internet and inviting office space must be a priority. With its existing reputation and connections, Edinburgh is poised to become the heartland of European fintech.

“You need startups to create the buzz and you need somewhere for those startups to live, so I think an accelerator or coworking space that’s dedicated to fintech would be very helpful in Edinburgh,” Segal explains.

But meaningful growth requires more than just buzzwords and warehouse-chic office space. Large financial institutions are likely to lead the charge towards establishing Scotland as a fintech hub. The collaboration needed to truly innovate requires a myriad of perspectives, including novel approaches from new players. Without being bogged down by legacy systems, finance startups are often able to innovate from a blank page, providing industry giants with fresh perspectives and original ideas. This requires the pulling power of top talent from local universities and other partnerships.

“Large businesses need to actively collaborate with startups, and that relationship goes both ways,” Jones explains. “Sometimes they’ll be collaborating directly, other times a corporation will act as a mentor to a smaller business, and other times big business will go to the fintech startups and ask them to help solve a problem.”

This style of collaboration offers distinctive benefits that will aid in the development of an effective ecosystem. Research has already found that the cost of innovation by corporates internally is enormous compared with the bootstrapping innovation of entrepreneurial startups. The shift towards greater collaboration between big business and new enterprise is already underway, but the potential for more rapid, agile and innovative partnerships has yet to be fully realised in Scotland.

But Scotland faces a major challenge in terms of infrastructure. Cities and countries across the world that are noted as fintech hubs have great connectivity, and Scotland’s 3G/4G and fibre broadband capabilities are severely lacking at present. In order to attract startups, Scotland must establish connectivity that is advanced and seamless.

“We’re not in the top 50 in the world for fast broadband — in fact, we’re sliding down the list,” says Derek Wyatt, non-executive director at Code Investing, an online platform that connects mature startups with investors. “You can’t grow fintech unless you have fibre. As a smaller nation, Scotland has a good chance to make decisions faster and take action. But these plans need to be made, committed to and the groundwork laid down now.”

While there’s already political will to improve Scotland’s connectivity, the biggest challenge lies in the inevitably high cost of plans to develop digital infrastructure. But a combination of creative thinking and long-term planning could generate the cash flow necessary to push forward with progress.

“Capital is needed in Scotland to fuel the creation of successful fintech ventures. On average, most startups currently move from Scotland to London to seek capital, and from London to the US in search of investment from venture capital firms,” says Liliana Reasor, CEO of venture capital company Novus Ordo Capital, which specialises in fintech. “Detailed analysis is necessary to determine the exact size of the investment. But based on other UK programmes — the Northern Powerhouse, for example — the Scottish government could set an initial £400 million fund.”

Wyatt believes that the creation of a state-owned investment fund could kickstart Scotland’s fintech revolution. “There are financial instruments for the Scottish government to consider in creating a substantial sovereign fund and living off the interest. That’s important because it provides security for thirty or forty years,” he explains. “If you want to become a fintech centre, then you need that level of funding. To achieve this, you might add a small tax on tourism — as little as £1 per night on everyone who stays overnight. A lottery would also raise capital for a sovereign fund.”

Such a fund could inject much needed capital into the city, but a tourism tax isn’t the only option available in Edinburgh. “A fund of £400 million would represent a tiny percentage of the £800 billion of funds managed by asset managers in Scotland. This fund could provide seed capital for new venture capital funds which will invest at different stages of the life of a company — from seed to growth,” says Reasor.

However funding is achieved, Scotland’s moment is here. Through strategic collaboration, a strong relationship with Europe and taking advantage of its many existing assets, this small country could quickly be propelled into the international spotlight as a global fintech hub. As Schoenberg puts it: “Whether it’s in digital currencies, blockchain technology, marketplace lending or alternative data, there’s a world of opportunity for an emerging fintech power. Why shouldn’t the Scots have their fair share of that?”

With or without independence — and despite or aided by Brexit — Scotland is primed and ready to become a global player in the future of finance.

Sarah Ronald is Founder of Nile. She is a pioneer in the field of commercial service design. She has been part of designing the first online and mobile banking services in the UK, and a Gold Cannes Award winner. She is an executive steering member of the British Interactive Media Association, and part of the Scottish Fintech Advisor Group.

Keely Flint is Director of Strategy at Nile. She has worked in digital and service design for more than 20 years. She has an Executive MBA from London Business School and held consultancy roles with Reed Elsevier, BUPA, Rufus Leonard and EY Seren. She is a mentor for startups in the Global Social Venture Competition.

This story is the result of a fintech-themed dinner that Nile hosted at Edinburgh’s Library of Mistakes in September 2016. The following finance professionals were in attendance: 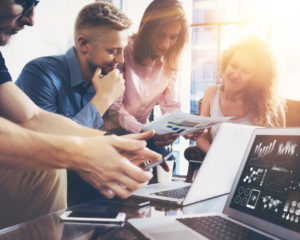