We always hear candidates talk about the recruiting “black hole.” In fact, it’s such a cliche that, frankly, those of us on the other side of the desk can’t help but be a little bored since, after all, it’s the deluge of unqualified applicants – not lazy recruiters – that are to blame for the fact that job seekers almost never hear back to begin with.

No matter how you look at it, the fact is that there’s a disconnect between the way recruiters find candidates, and the way candidates are forced to find jobs – and the odds are stacked against all but a fraction of candidates with an in-demand  skills, industry expertise or hard-to-find experience.

That’s why both sides work so hard to get around the traditional application process – and, as the best sourcers already know, sometimes, working around the black hole takes a ton of creativity.

As hard as that can be, standing out as a candidate can be infinitely more difficult.

That’s why I was so intrigued when Elski Felson posted a video titled “My Story Snapchat Resume.” By the time it caught my attention, the video had already accumulated well over 360,000 views in a matter of a few days – by now, it’s over a million, and the virality of this outside-the-box approach speaks to the collective frustration of job seekers everywhere at the collective radio silence many automatically associate with recruiters.

Once this story hit my Twitter feed, I did what anyone who geeks out on this kind of stuff would do – I reached out for an interview. Within thirty minutes, the interview was complete and I was reminded of just how powerful and personal feedback can be.

We ask job seekers to put everything on the line, to jump through ATS hoops and over counterintuitive, clunky and cumbersome online application processes, and in return, they often receive nothing but an automated e-mail. But reciprocating by letting candidates at least know when they’re no longer being considered isn’t just a small step that would make a big difference to most applicants out there – it’s something that we owe every candidate, regardless of outcome.

Elski is the face of an entire army of frustrated job seekers out there who are finally fed up with recruiting as usual – only unlike many stuck in the same situation, Elski decided to take matters into his own hands.

So just who is the brains behind this viral video? Elski Felson (names and details have been changed to protect the innocent from irate recruiters and online trolls, if you can tell the two apart) is a 24 year old graduate of Ithaca College, a top ranked liberal arts school in upstate New York, where he graduated with a degree in finance and is currently working towards his MBA. He’s ambitious, smart and has everything most employers look for in top talent – except experience.

Which means that he also happens to be unemployed as he looks to plant his foot in a door and start his first steps down the path towards a fulfilling career.

It’s not for lack of trying; it’s just that Elski feels, and justifiably so, that the application process was more or less a “demoralizing crap shoot.”

After months of applying for positions without hearing so much as a peep or receiving even an iota of meaningful feedback or updates, save the occasional weekly list of backlinked jobs sent from an automated feed to his inbox under the guise of a “talent network,” Elski picked up and moved across the country to try his luck, like so many before him, in sunny Southern California, moving into his sister’s spare room in Santa Monica just three weeks ago.

Hey, there are worse places to settle in for a protracted job search, but Elski finally decided to throw the traditional application process out the window and actually create something that would help him stand out and break the silence from recruiters – and optimally, even end with an offer. The result is a lesson for all of us at what the future of recruiting might really look like.

Consider Elski’s traditional resume, embedded alongside the viral video that launched him into the social media stratosphere. Which paints a more accurate representation of Elski?

Social Media and it's role when looking for a job. 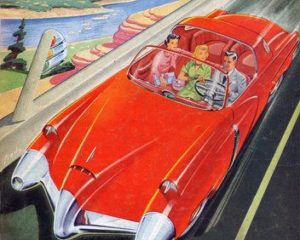