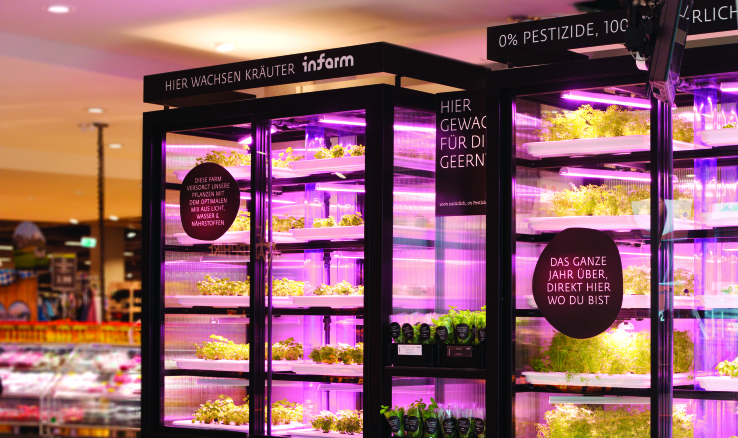 Infarm, a startup that has developed vertical farming tech for grocery stores, restaurants and local distribution centres to bring fresh and artisan produce much closer to the consumer, has raised $25 million in Series A funding.

The round is led by London-based VC firm Balderton Capital, with participation from TriplePoint Capital, Mons Investments, and previous investors Cherry Ventures, QUADIA and LocalGlobe.

It brings the total raised by the Berlin-based company to $35 million, including a $2.5 million grant from the European Commission as part of the Horizon 2020 program.

Infarm says the new capital will be used for international expansion and to further develop its 5,000 sqm R&D centre in Berlin. This will include bringing its vertical farming system to Paris, London, and Copenhagen, in addition to other German cities later this year. The startup is targeting 1,000 farms to be operational across Europe by the end of 2019.

Founded in 2013 by Osnat Michaeli, and brothers Erez and Guy Galonska, Infarm has developed an “indoor vertical farming” system capable of growing anything from herbs, lettuce and other vegetables, and even fruit. It then places these modular farms in a variety of customer-facing city locations, such as grocery stores, restaurants, shopping malls, and schools, thus enabling the end-customer to actually pick the produce themselves.

The distributed system is designed to be infinitely scalable — you simply add more modules, space permitting — whilst the whole thing is cloud-based, meaning the farms can be monitored and controlled from Infarm’s central control centre. The whole thing is incredibly data-driven, a combination of IoT, Big Data and cloud analytics akin to “Farming-as-a-Service”.

The idea, the founding team told me back in June last year when I profiled the nascent company, isn’t just to produce fresher and better tasting produce and re-introduce forgotten or rare varieties, but to disrupt the supply chain as a whole, which remains inefficient and produces a lot of waste.

“Behind our farms is a robust hardware and software platform for precision farming,” explained Michaeli. “Each farming unit is its own individual ecosystem, creating the exact environment our plants need to flourish. We are able to develop growing recipes that tailor the light spectrums, temperature, pH, and nutrients to ensure the maximum natural expression of each plant in terms of flavor, colour, and nutritional quality”.

Two years since launch, Infarm says it is now operating more than 50 farms across Berlin in supermarket aisles, restaurants kitchens, and distribution warehouses. This includes introducing in-store farming into EDEKA and METRO locations, two of Germany’s largest food retailers, in which dozens of “quality herbs and leafy greens” are grown and sold at what the startup describes as affordable prices.

Noteworthy, with an output of up to 1,200 plants per month from a single farm unit, Infarm claims it has already enabled some locations to become completely self-sufficient in their herb production.

“This is the beginning of the urban farming (r)evolution: it will redefine what it means to eat well, reshape the landscape of cities, and re-empower the people to take ownership of their food,” says Erez Galonska in a statement. “Our ambition is to reach cities as far as Seattle in the United States or Seoul, South Korea with our urban farming network”.