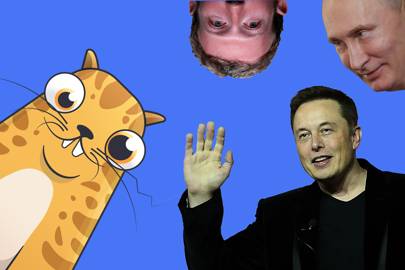 Things in the technology world move rather quickly. Last year we saw Uber wrestle with self-implosion while North Korea tested off its hacking skills on an unsuspecting world. At Apple, Tim Cook and co finally worked out how to turn everyone into animated piles of poop.

But what will 2018 hold? Step with me through the rabbit hole and let’s take a month-by-month look at a bunch of things that might – but almost definitely won’t – happen in the next year.

Might happen: After soaring in price by nearly 2,000 per cent in a single year, the bitcoin bubble finally pops. A handful of super-rich tech bros become a little bit less rich and all the annoying people in your office start talking about how they knew it was going to happen all along.

Might not happen: In the wake of the bitcoin crash, CryptoKittiesbecome the currency of choice on the dark web.

Might not happen: Amazon releases the Echo Panopticon, an Alexa-powered system that puts an always-on camera in every corner of your house and automatically orders toilet paper when you run out. The device quickly becomes the market leader for in-home surveillance.

Might not happen: The CryptoKitty bubble bursts and trust in cryptocurrencies falls to an all-time low. Luckily, a Silicon Valley startup invents something it calls ‘physical crypto’ which is literally indistinguishable from real money in every way but since when has that ever stopped them from inventing something anyway.

Might not happen: After a lukewarm critical response to Solo, Disney replaces all cast members in future films with porgs.

Might happen: A reformed Uber starts acting like a proper employer and Transport for London renews its licence. Uber prices skyrocket and everyone realises it was too good to be true in the first place.

Might not happen: Google releases its own version of the Amazon Panopticon but says that it definitely isn’t copying Amazon and actually has been working on a similar device since 1995. No one buys it even though it is probably the best in-home surveillance device on the market.

Might happen: A big hack somewhere causes everyone in cybersecurity to say ‘we told you this would happen’. Repeat for every other month of 2018.

Might not happen: Tesla finally delivers the final Model 3.

Might happen: Apple announces the iPhone XS. Everyone calls it the iPhone ‘excess’ which causes Tim Cook to retreat into an unquenchable rage.

Might not happen: Apple decides that that removal of the headphone jack was so successful that they’ve decided to do away with physical devices altogether this year. Prices start at £1,099.

Might happen: Magic Leap finally releases its mixed reality headset. Everyone accepts that it is ‘okay’ and ‘a bit like the HoloLens really’.

Might happen: Amazon celebrates its biggest ever Black Fridayafter its army of Panopticons ‘accidentally’ orders every customer seven UHD TVs.

Might not happen: Elon Musk’s boring machine accidentally ruptures the magma chamber beneath Yellowstone Park, setting off a supervolcano. Elon Musk catches the next SpaceX to Mars.

Might happen: Everyone reflects on how it was possible that 2018 was even worse than 2017.

Might not happen: As the world is engulfed in a volcano-induced winter, AI robots start duking it out. Musk tweets a 20,000-character ‘I told you so’ from his Martian hut.

How to write a technology resume in 2018